The most experienced surgeon combining both parotid surgery with a facelift.*

Parotid tumors are neoplasm or abnormal growths of the parotid gland.  The parotid gland is one of several salivary glands and is the largest.  It is located in front of the ear and goes to approximately the angle of the jaw.  The parotid gland is formed a little too early during the development of the embryo, occurring at the same time as lymph nodes and nerves.  Because of this, the gland in a developed individual is mixed with the facial nerve (the main nerve that moves the face) and lymph nodes (glands that clean away infection and some tumors that are found throughout the body).  In Figure 1, the location of the gland is seen along with the facial nerve. 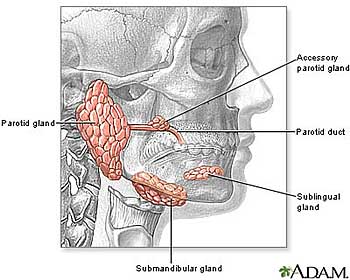 Parotid tumors are benign (non-cancerous) 85% of the time and malignant (15% of the time).  The benign and malignant tumors occur in many different types.  The most common tumor overall is the benign mixed tumor or pleomorphic adenoma as seen in Figure 2.  Mixed tumors have well-defined edges and don’t have significant portions invading normal tissue like cancers.  The main issue with these tumors is that they will continue to grow making it more and more difficult to remove them.  More ominously, they can eventually turn into a malignant tumor (carcinoma ex-pleomorphic adenoma) about 5 to 15% of the time.  The next most common benign tumor is the Warthin’s tumor (also known as papillary cystadenoma lymphomatosum).  Like the pleomorphic adenoma, surgical excision is likely curative with a small incidence of recurrence.  They are not known to degenerate into carcinoma, but occasionally occur bilaterally (on both sides).  Other benign tumors include oncocytomas, monomorphic tumor, and others and are all well-treated with excision.  Hemangiomas are blood vessel tumors that can occur in the parotid as well as other places in the body and are the most common parotid tumor in children.    Benign lymphoepithelial lesions are benign tumors that often occur in HIV positive individuals and can be associated with recurrent cysts.  They are removed when they become disfiguring or have changed in a way that lymphoma (a type of cancer) is suspected. 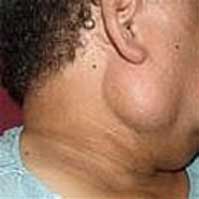 Malignant parotid tumors can be low grade (weaker type of cancer with higher cure rates) or high grade. The most common type of malignant tumor is the mucoepidermoid tumor, with the low grade being the most common and act and are treated almost like a benign tumor. The high grade mucoepidermoid is much more dangerous and, like most aggressive parotid malignancies, are treated with aggressive surgical excision, often a neck dissection and post-operative radiation therapy. The limited surgical exposures discussed below are not appropriate for most malignant parotid tumors. Adenoid cystic carcinomas are the second more common. These challenging tumors are famous for growing quite distantly in an area nerve. The surgical treatment needs to include following the tumor out in neighboring nerves. Malignant mixed tumors (carcinoma ex-pleomorphic adenoma) are the third most common.

The most common symptom of both malignant or benign parotid tumors are a mass in the back part of the cheek in front of the ear.  These are discovered by the patient or by an examining doctor.  Other symptoms are most common in malignant tumors and seldom occur in benign tumors.  These include pain, facial paralysis, ear pain, cheek numbness,  trismus (difficulty opening the jaw), and swelling in another part of the neck (indicative of a metastatic cancer).

The diagnosis of a parotid neoplasm starts with a physical examination.  At that time the tumor itself, as well as facial nerve function will be assessed.  Also, any associated lymph node swelling, skin changes, and location will be checked.  Next imaging will be arranged usually being an MRI.  Figure 3a shows a typical benign tumor with its well encapsulated margins.  Figure 3b shows a mass suspicious for malignancy with its irregular borders.  After the MRI, a fine-needle aspiration will be done.  This is typically done by a Parotid specialist in the office.  A fine needle aspiration is performed by placing a very small needle (smaller that a needle that is used to draw blood) into the tumor twice.  The cells obtained are then processed and a cytopathologist doctor will attempt to make a diagnosis.  Knowing ahead of any surgery as to the malignant potential of any parotid tumor will guide the type of surgery that will be done.

Although the facelift incision was initially described in the Plastic Surgery literature in the 1960’s, it has only recently been popularized.  A recent article described the usefulness of this incision and compared it favorably to the standard incision in terms of results and surgical exposure (“An anatomical comparison of Blair and facelift incisions for parotid surgery.” by Nouraei, S.A.R. in Clinical Otolaryngology Vol 31; Issue 6: 531-534,  Dec 2006.)  At the Alessi Insititute for Facial Plastics, Dr. Alessi has been using this incision since 1990.  In 1992, he first combined a parotidectomy with a facelift.  In 1998, Dr. Alessi began to routinely combine the SMAS flap with non-facelift parotidectomies.  The later gives a more natural contour to the angle of the jaw and is felt to decrease the incidence of eating-related cheek sweating seen in a significant portion of parotidectomy patients.  The healed incision of one of patients can be seen in figures 4a and b. In 4a, the top arrow show the location of the original tumor.  The middle arrow shows the barely discernable incision in front of the ear.  The lower arrow shows the parotidectomy defect.  With the SMAS flap reconstruction of the area, the usual "divot" or depression is not seen (lower arrow in 4a).  4b shows the almost invisible incision behind the ear.  High and anterior (towards the front) tumors usually cannot be taken out with facelift incision.  Dr. Alessi has had many cases with anterior tumors with no conversions to a standard incision. 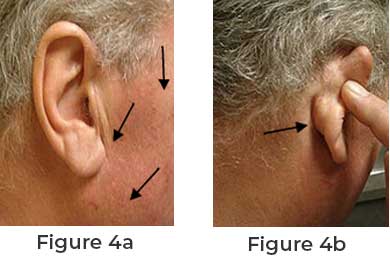 *As determined by a search of published results on the web.